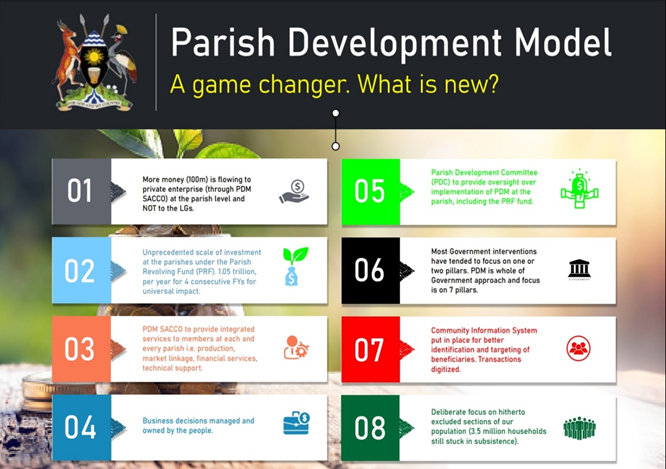 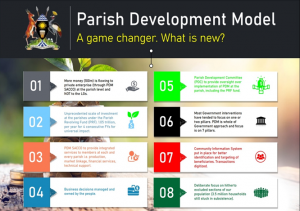 As an extension of the government’s approach to sustainable and inclusive development as envisaged under the National Development Plan III (2020-2025), approved January 30th, 2020 by the Parliament of Uganda, the Parish Development Model (PDM) Programme was launched by the President of Uganda on the 26th February, 2022 in Kibuku Secondary School, Kibuku District in Bukedi sub region.

The model has a seven-pillar foundation intended to uplift 39% of households from subsistence to the money economy. The Programme is aimed at benefiting 10,594 parishes with the parish being the key Administrative Unit for its implementation. The pillars according to MoFPED (2021) include; Production, Storage, Processing and Marketing, Infrastructure and Economic Services, Financial Inclusion, Social Services, Mindset change and Cross cutting issues, Parish Based Management Information Systems and finally Governance and Administration.

Following parliamentary approval and criticism by the President of the earlier proposed 17 million per Parish in the FY 2021/2022, the 2022/23 budget allocated UGX 1 trillion towards the implementation of the PDM, resulting into UGX 100 million per Parish (MoICT & NG, 2021). Each parish SACCO will be allocated UGX 100M as a revolving fund reserved for the purchase of agricultural inputs by households still in subsistence farming practices.

As a developing economy, this is a great initiative by government, in ensuring the common person ‘omuntu wa wansi’ is uplifted from poverty to the much-contested middle income class (at individual level). However, more still has to be done to ensure the intended objectives are achieved.

The PDM status was further amplified by Uganda Bureau of Statistics (UBOS) where the Executive Director explained to the country that Uganda is not yet ready to roll out the PDM. He explained that UBOS has not yet received and analyzed all the required data from the parishes to guide the implementation of the initiative, to the extent that some areas had not started data collection. Districts like Kampala and Wakiso had collected only 1% of the required data due to financial constraints.

Challenges that may affect the efficiency of the Parish Development Model (PDM) Programme.

Over the years, Uganda has adopted a number of Poverty Alleviation Programmes and policies including PEAP in 1997, Rural Farmers Scheme (early 1990’s), Entandikwa in the run up to 1996, Bona Bagaggawale (2007), Youth Capital Venture which later morphed into Youth Livelihood Programme, Operation Wealth Creation (OWC), NAADS, NUSAF, Emyooga and the most recent PDM. All these unfortunately accomplished borderline to disputable performances, being clones or disguises of the former projects and with government auditors having found a number of them mismanaged. To date, poverty statistics are still alarming in the country, with Uganda being ranked 24th among the poorest nations in the world (Global Finance, 2021), with GDP (PPP) per capita at only $2,574. A World Bank study done in 2020 revealed that more than a third of Ugandans live on less than $1.90 and one in every five people live in extreme poverty. (World Bank, 2020)

With the economic outlook due to the Covid-19 pandemic still uncertain, the following challenges (regrettably habituated) could predispose the PDM to the same fate as the other Poverty Alleviation Programmes initiated before it.

The following must be addressed if the PDM is to achieve desired results:

In conclusion therefore, unless government ensures transparency and accountability as benchmarks for rolling out the Parish Development Model and fine-tuning implementation, poverty eradication schemes in Uganda will remain a strategy that needs to be re-thought.